The Rise of Informal Logic: Essays on Argumentation, Critical Thinking, Reasoning and Politics

We are pleased to release this digital edition of Ralph Johnson’s The Rise of Informal Logic as Volume 2 in the series Windsor Studies in Argumentation. This edition is a reprint of the previous Vale Press edition with some minor corrections.

We have decided to make this the second volume in the series because it is such a compelling account of the formation of informal logic as a discipline, written by one of the founders of the field. The book includes essential chapters on the history and development of informal logic. Other chapters are key reflections on the theoretical issues raised by the attempt to understand informal argument. Many of the papers were previously published in important journals. A number of them were co-authored with J. Anthony Blair. Three of them have appeared only in the present book.

Ralph H. Johnson was hired as a Philosophy Instructor at the University of Windsor in 1966. He received his Ph.D in Philosophy from the University of Notre Dame in 1972. In 2006 he retired after 39 years, having won a 3M Teaching Fellowship for outstanding teaching in 1993, and being appointed the rank of University Professor in 1994. During his time in the Windsor Philosophy Department, he served two terms as Head of Department.

In 1971, Johnson and his colleague, J. Anthony Blair, developed an approach to logic they named informal logic. In 1977, they published their influential text, Logical Self-Defense (3rd edition, 1993; U.S. edition, 1994; IDEA, 2006). In 1979, they founded the Informal Logic Newsletter, which became the journal Informal Logic in 1985.

Ralph H. Johnson has published innumerable articles, been a featured speaker at many conferences, and is the author of Manifest Rationality: A Pragmatic Theory of Argument. In 2000, he was awarded the Distinguished Research Award by the International Society for the Study of Argumentation. And in 2003, he was elected a Fellow of the Royal Society of Canada. He is a Fellow of the Centre for Research on Reasoning, Argumentation and Rhetoric (CRRAR) at the University of Windsor. 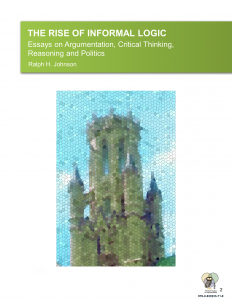