This tribute to the breadth and influence of Trudy Govier’s philosophical work begins with her early scholarship in argumentation theory, paying special attention to its pedagogical expression. Most people first encounter Trudy Govier’s work and many people only encounter it through her textbooks, especially A Practical Study of Argument, published in many editions. In addition to the work on argumentation that has continued throughout her career, much of Govier’s later work addresses social philosophy and the problems of trust and response to moral wrongs. The introduction by Catherine Hundleby situates Govier’s research along the path of her unusual academic life.

While following the timeline of Govier’s research publication, in this collection the authors build on her work and suggest certain new connections between her argumentation theory and social philosophy. A Practical Study of Argument, first published in 1985, situates Govier among a distinct segment of informal logicians whose concerns about teaching reasoning to post-secondary students orient their research, Takuzo Konishi argues. Moira Kloster evaluates Govier’s progress in the challenge of providing critical thinking education to diverse and changing social contexts. Shifting gears to social philosophy but still addressing education, Laura Elizabeth Pinto explores the significance of Govier’s work on trust for explaining the problem of “audit culture” for teaching. At the centre of this volume, social philosophy receives an abstract meta-ethical defense from Linda Radzik.

Moving solidly into the domain of normative social philosophy, Alice MacLachlan reconsiders Govier’s condemnation of revenge by viewing it as a form of moral address, but she notes how revenge as an act of communication contrasts with argumentation in lacking the respect that Govier maintains is intrinsic to argumentation. MacLachlan ultimately agrees that revenge is morally indefensible. The practical challenges of addressing others in the aftermath of wrongdoing, especially in public contexts, can make it difficult to distinguish between victims and combatants or wrongdoers, Alistair Little and Wilhelm Verwoerd explain, and Kathryn Norlock argues that forgiveness is psychologically vexed too. People may recognize transformation to be in principle possible for all people, Norlock argues, and yet we may find the evidence regarding some particular evildoer sufficient to count that person as an exception.  Finally Govier responds to the various papers.

TAKUZO KONISHI is Associate Professor of English Language and Communication at Showa Women's University, Tokyo. His research fields include theory and history of argumentation from informal logical and rhetorical perspectives, oral history as productive and representational art, and public spheres. He is currently researching history of informal logic since 1970s and theoretical issues on mediation and (co-)authorship in oral history research.

MOIRA KLOSTER is Professor Emerita of Philosophy at the University of the Fraser Valley. She has developed critical thinking courses and textbooks, with a particular interest in critical thinking as it is practiced outside academia, in nursing, cook training, border security, and rehabilitation for prison inmates. She is currently working in philosophy of conflict management.

LAURA ELIZABETH PINTO is Assistant Professor at the University of Ontario Institute of Technology's (UOIT)
Faculty of Education and the recipient of a 2009 Canadian Governor General’s Gold Medal for her doctoral work at
the University of Toronto. Her recent book, Curriculum Reform in Ontario: Common Sense Processes and
Democratic Possibilities (University of Toronto Press, 2012), was shortlisted for the Speaker's Book Award of the
Ontario Legislature. Her critically-oriented research focuses on democracy and social justice in education
policy, politics, and practice. Her current SSHRC-funded research explores policy-layer enactment through postqualitative research methods.

LINDA RADZIK (Ph.D., Arizona) is Professor of Philosophy at Texas A&M University. The author of Making Amends: Atonement in Morality, Law, and Politics (Oxford University Press, 2009), her research addresses moral, legal, and political issues that emerge in the aftermath of wrongdoing. She has published on such topics such as forgiveness, criminal punishment, and political reconciliation. Radzik’s most recent work explores bystanders’ responses to wrongdoing. She was the recipient of Research Fellowships from the Alexander von Humboldt Foundation in 2004-05 and 2011.

ALICE MACLACHLAN is Associate Professor of Philosophy at York University and a co-founder and coeditor
of Feminist Philosophy Quarterly. She works in moral, political, and feminist philosophy, focusing on philosophical issues arising in the aftermath of conflict. She is co-editor of Justice, Responsibility and Reconciliation in the Wake of Conflict (Springer 2013) and her other publications include “Trust Me, I’m Sorry: The Paradox of Public Apologies,” "Gender and the Public Apology," "Beyond the Ideal Political Apology," "The Philosophical Controversy over Political Forgiveness,” “Unreasonable Resentments,” and “Moral Powers and Forgivable Evils.” She received her Ph.D from Boston University (2008) and holds degrees from Queen’s and Cambridge Universities.

ALISTAIR LITTLE is a former loyalist political prisoner, from an Ulster Volunteer Force (UVF)(Protestant) background. For the last 25 years he has been doing peace/reconciliation/conflict transformation work in Northern Ireland, Ireland, the Balkans, the Middle East, and South Africa. A key focus of his work remains the exploration of the human cost of violent conflict, working with former combatants, survivors and members of wider society. This exploration includes the facilitation of indepth sharing of personal histories/storytelling between diverse participants, in combination with deep dialogue and nature-based activities. He is a Director of Beyond Walls Ltd.

Wilhelm Verwoerd is a former lecturer in Philosophy at the University of Stellenbosch and a former researcher
within the South African Truth and Reconciliation Commission. From 2002 untill 2012 he worked closely with Alistair Little as a facilitator of dialogues and storytelling between ex-combatants, survivors and members of wider society, mostly in connection with the conflict in and about Northern Ireland. Since 2013 he has been based again in South Africa and continues to work as a facilitator, researcher and part time teacher. He is a Research Associate in the Department of Practical Theology and Missiology, University of Stellenbosch and a Director of Beyond Walls Ltd.

KATHRYN J NORLOCK (Ph.D. Wisconsin) is the Kenneth Mark Drain Chair in Ethics at Trent University in Peterborough, Ontario, and an Associate Professor of Philosophy, affiliated faculty in the M.A. program in
Sustainability Studies, and associated faculty in Gender & Women's Studies. She is the author of Forgiveness from a
Feminist Perspective and editor of The Moral Psychology of Forgiveness. She is a co-founder and co-editor of Feminist Philosophy Quarterly. 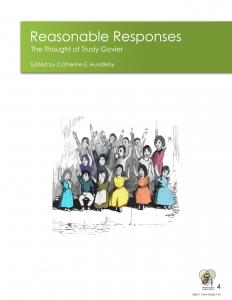