Rigour and Reason : Essays in Honour of Hans Vilhelm Hansen

Built in the centre of Copenhagen, and noted for its equestrian stairway, the Rundetaarn (Round Tower), was intended as an astronomical observatory. Part of a complex of buildings that once included a university library, it affords expansive views of the city in every direction, towering above what surrounds it. The metaphor of the towering figure, who sees what others might not, whose vantage point allows him to visualize how things fit together, and who has an earned-stature of respect and authority, fits another Danish stalwart, Hans Vilhelm Hansen, whose contributions to the fields of informal logic and argument theory have earned the gratitude of his colleagues, and inspired this collection of essays, written to express the appreciation of its authors and of the many, many colleagues they represent. 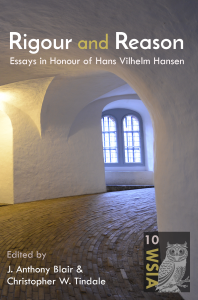 Copyright (c) 2020 Windsor Studies in Argumentation & the original authors, unless otherwise noted. Image of the Rundetaarn by Jorge Láscar. Photograph on back cover of Hans V. Hansen by Madeleine Hansen.